On the last Friday of the month, I like to take some time to geek out about my favorite video game franchise, Final Fantasy.

I'm replaying FFIX, and I just passed the point where Garland, the overseer of Terra tells his beta-doll Kuja that he created him with a time limit until MC Zidane grew strong enough to carry out the mission to make Gaia habitable for the Terrans (through war and destruction). As if Kuja wasn't already mad that Garland created Zidane (he threw him off the ship on their way to Gaia, so Zidane didn't have any memory of his origin or mission), so when he heard that he was going to die, he SNAPPED and destroyed Terra in a matter of seconds.

So this brings me to the topic today: creating a villain. Many of the villains in the Final Fantasy games were created by the people around them. Kuja was already pretty bad, but in his case he was literally created to be. Learning there was a caveat just made it worse, and in the end, he redeemed himself.

FFVII had Sephiroth, who was actually pretty chill until he thought humans destroyed his people. That's when he snapped and destroyed Nibelheim. Had he not thought he was an Ancient, his story would've been totally different. Crazy enough, he might've been a main character in what would be a totally different game! We saw a little of that in Crisis Core with Genesis as the main villain. He wasn't as powerful as Sephiroth, and that irked him.

FFVIII has Ultimecia, and going off of the Ultimecia is Rinoa theory I shared during 2016's A to Z Challenge, Ultimecia wouldn't have existed had SEED not killed Squall in the future. Rinoa never would have become Ultimecia and tried to kill all SEED. She wanted revenge.

Though I didn't talk about Seymour in FFX during that challenge and while he wasn't the main villain, he was trying to reach that because of the bullying he experienced being half human and half Guado. He never felt good enough, and so he strove to be better than everyone else and show them up with force.

Most recently was Ardyn from FFXV, who was supposed to be King of Lucis in his time, but they used his soul to absorb demons, so he became corrupted and was cast out for it. Of all of the villains, I think he was the most justified in his reasoning to destroy Lucis. Like Kuja, you can't use people as test dummies and not expect them to snap when you try to discard them.

I could play with "What if" scenarios all day with these five games. Just imagine the possibilities! I'm actually imagining an FFVII with Sephiroth, Zack, and Cloud as a team, and that would've been really interesting. Or an FFIX where Kuja, you know, didn't throw Zidane off the ship, and Dagger as the main character trying to stop them.

Sounds like I should work on some Alternate Universe stories, huh? ... Hm...

Tuesday Tales: Sitting Down with Brodie


My mind is a little foggy today, probably because of the weather and a lingering cold in my system. But I have a post to do, so I'm going to push through! I've been asking a few questions of my characters in Fractured Princess, so I will ask the same to my scholar-Watchman Brodie. It's been a while since we've heard from her.


What words or phrases do you overuse?
Brodie: I believe "but why?" may be my most used phrase. I like to ask questions, which you would think is a good thing, but I think I tend to catch people off guard when they think they've spoken definitively about something with no need for explanation.

How do you display affection?
Brodie: I . . . don't? I suppose I hug or give a small touch, but not often.

How do you want to be seen by others?
Brodie: I hope people see me as brave, someone they can depend on and trust, good.

How do you think others see you?
Brodie: Possibly combative, just because I like to question things, but hopefully they don't see me as troublesome because of that.

How do you react to praise?
Brodie: It feels good; I can't lie. You never know how people will take you stepping out of the box, so when it goes well, it's good to know others approve.

How do you react to criticism?
Brodie: If it's constructive, I appreciate it. Otherwise, if it comes from a place of judgment or the like, keep it to yourself, unless you want to deal with my response.

What is your perception of family?
Brodie: I come from a big family. I was raised by my older siblings, and I try not to take that for granted. We don't always see eye-to-eye, but in the end they are all I have, and I wouldn't trade them for the world.

What advice would you give your younger self?
Brodie: Times are going to get hard, but you are strong enough to make it out on the other side. Scars are just symbols of what you've survived.


Thank you, Brodie! I hope everyone has a good week, and if you're stuck in Nor'easter Purgatory with me, stay warm this Spring!
on March 20, 2018 1 comment:

It's the second Wednesday of the month, and that means it's time for Wednesday Words (this is probably the only day I usually remember to do on time). 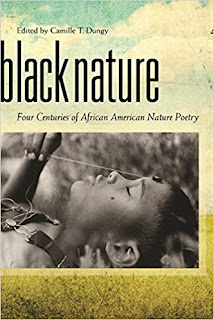 As part of my research for my new project, I'm trying to immerse myself in black poetry, African culture, and African mythologies. This past week I began reading Black Nature: Four Centuries of African American Nature Poetry, edited by Camille T. Dungy.


At first, I thought, "I hate reading poetry about nature; I'm going to take this back to the library," but as I started reading a little more, I found poems I love and poems that remind me how much I love nature. Though I love the city, I'd give anything to live out in the countryside with a telescope and flowery fields all around me. Shoot, that's a poem I can start right there.


Also, living in Delaware, where nature poetry is, seemingly, all people do here, that's probably why I claimed I don't like it, but as the forward of this book says, there are also subconscious stigmas among black people about nature. However, with 400 years of nature poetry in my hand, it's clear how many other black Americans have embraced it.


Instead of sharing a page, I'm going to share this poem by George Marion McClellan called "A September Night."


Through marsh and lowlands stretching to the gulf.
Begirt with cotton fields Anguilla sits
Half bird-like dreaming on her summer nest
Amid her spreading figs, and roses still
In bloom with all their spring and summer hues.
Pomegranates hang with dapple cheeks full ripe,
And over all the town a dreamy haze
Drops down. The great plantations stretching far
Away are plains of cotton downy white.
O, glorious is this night of joyous sounds
Too full for sleep. Aromas wild and sweet,
From muscadine, late blooming jessamine,
And roses, all the heavy air suffuse.
Faint bellows from the alligators come
From swamps afar, where sluggish lagoons give
To them a peaceful home. The katydids
Make ceaseless cries. Ten thousand insects' wings
Stir in the moonlight haze and joyous shouts
Of Negro song and mirth awake hard by
The cabin dance. O, glorious is this night.
The summer sweetness fills my heart with songs
I cannot sing, with loves I cannot speak.


What are you reading this week?

You know, if I had a little voice in my head, I wouldn't have a problem remembering IWSG. It's the first Wednesday of the month, so that means it's time for us writers to throw our insecurities into the air and see where they land!

Last month, I told y'all that I was revising Fractured Princess into present tense, and I've reached the end again. With this revision, I've also made a few more cuts on scenes/sub-plots that no longer fit the story, so according to Google, I'm down to just over 88,000 words! This story has never been this short. But I hope with the change in tense, the voice clicks with an agent, as "connecting with the voice" was the general consensus in my last round of query fishing. I'm still working on the new project, but I really want the world to see FP.

On the job front, the job I've been waiting on for 4-5 years now has finally posted at my old workplace, so I applied. I'm claiming it as mine and throwing all the positivity I can into the atmosphere. (Side note: Google doesn't think "positivity" is a word. Weird.)

Here's to all going well for me this year!

EDIT: I forgot this month's question, which is: How do you celebrate when you achieve a writing goal/ finish a story?

I actually don't, or haven't had the chance to, really. I should celebrate completing this last revision, but we'll see. I'll try to remember to celebrate finishing the first draft of the next project.
on March 07, 2018 18 comments:

February ended before I could do my monthly Final Fantasy Friday (and I didn't feel like posting one on the same week as Tuesday Tales), so this is a special First Friday Final Fantasy post.

And funny enough, I'm not sure how much more I can talk about Final Fantasy, especially when no new games are out, and I'm not playing anything new. I do have a Final Fantasy Type-0 awaiting my gameplay, and I did just download a Final Fantasy Dissidia on my phone that I haven't touched yet, so we'll see. I'm going to stretch it out for as long as I can.

If you aren't already aware, most of the Final Fantasy games are single-player role-playing games (RPGs). FFXI and FFXIV were massively multiplayer online role-playing games (MMORPGs), and with the PS4, the FFXV team had the chance to make the game this HUGE endeavor with the main single-player game, a PC game they just released, a mobile game, playable side games, etc. One of the side games is Comrades: A Multiplayer Expansion, so I threw away my lack of care for MMORPGs and am trying this out (mainly because it's a world I'm already familiar with. I did the same with FFVII: Dirge of Cerberus, which is a third-person shooter).

The great thing about this game is that you can create your own avatar, so I get to put myself in the game! If you follow me on Twitter, you know my greatest "argh" about Final Fantasy games is the lack of black women in the franchise. There are over 15 games, and so far, only X and XV have given us black women as non-playable side-characters (Dona and Sania). I'd love to see a black woman MC in the next installment. For now, I will enjoy literally seeing myself in the MMORPG.

And here I am (these are NOT my tats):

Final thoughts: If I do end up changing my Friday posts, they will remain Fantasy Fridays, so I'd ultimately either need to share what I'm reading (which is hopefully fantasy) or highlight some fantasy I have read. Which means Wednesday Words would strictly be for what I've been writing, so excerpts, draft changes, things like that.