I did not plan to talk about this right now. It just came out of my fingers.

I was supposed to be at Universal Fan Con on Friday, but I received an e-mail last Friday that it is postponed because they didn't have enough money to give us the convention we deserved.

I'm still trying to process that, and if you've been on Twitter the past week, you may have seen some more than livid people who were also supposed to attend, some who--unlike myself, who only lives a couple hours from Baltimore and was able to cancel my hotel and parking--are forced to come to Baltimore regardless.

For those who don't know, Universal Fan Con was created for fans of color and other marginalized groups who don't often feel comfortable at the major Comic Cons for various reasons. This would have been my first big convention (Dover has a free one in the Summer), so I had to really build myself up to go. I wasn't even going the whole 3 days, but I've only really lost my original $35 in backing the Kickstarter. Others--fans, vendors, etc.--have lost more.

There are a lot of fingers being pointed, a lot of excuses and explanations that aren't really acceptable, but a bunch of groups got together and are doing a Pop-up Convention call Wicomicon for those who are stuck going to Baltimore this weekend. I've already made plans since, so I can't go, but I really hope everyone has a great time, and it's great that this group is saving the day.

There's still a lot of research I need to do about the people involved, because I'm hearing things now that I haven't before. Something in me KNEW I wouldn't be going to this convention, especially when I received an e-mail for people to confirm their tickets by clicking a link in a previous e-mail I didn't receive because they said they couldn't charge my card (though they did, so that was terrible communication right there). If things turn back around, then perhaps I can trust the parties involved again, but I'm still on a very unsteady fence about the whole ordeal.

So, I was going to go ahead and push this to Thursday because it'll be after 9PM by the time I post this, but I'm a stickler for my blog schedule. 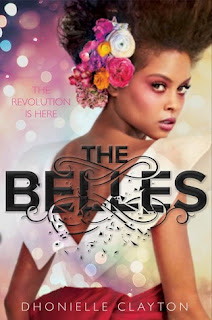 I am currently reading for pleasure again, so of course the first book I am opening is Dhonielle Clayton's The Belles.

This COVER! It's so beautiful. And when you open the book, there is a HOT PINK MAP. You guys know I love pink. haha

Here is the book blurb:

Camellia Beauregard is a Belle. In the opulent world of Orléans, Belles are revered, for they control Beauty, and Beauty is a commodity coveted above all else. In Orléans, the people are born gray, they are born damned, and only with the help of a Belle and her talents can they transform and be made beautiful.

But it’s not enough for Camellia to be just a Belle. She wants to be the favorite—the Belle chosen by the Queen of Orléans to live in the royal palace, to tend to the royal family and their court, to be recognized as the most talented Belle in the land. But once Camellia and her Belle sisters arrive at court, it becomes clear that being the favorite is not everything she always dreamed it would be. Behind the gilded palace walls live dark secrets, and Camellia soon learns that the very essence of her existence is a lie—that her powers are far greater, and could be more dangerous, than she ever imagined. And when the queen asks Camellia to risk her own life and help the ailing princess by using Belle powers in unintended ways, Camellia now faces an impossible decision.

With the future of Orléans and its people at stake, Camellia must decide—save herself and her sisters and the way of the Belles—or resuscitate the princess, risk her own life, and change the ways of her world forever.

The magic of and in this book so far, and the imagery and descriptions are captivating! I can't wait to read what happens, so hopefully I can steal some time (I think I mentioned already that this is a busy month for me). If nothing else, I'll be on two planes Monday morning, so I'll have time to read then.

I'm 132 pages in already, so as to not spoil anything for potential readers (and myself), I'll use Random.org to pick a page up to that point.  Page 71!

Even though I've been dressed and measured and primped so many times, I still hate the feeling in these moments that my body doesn't belong to me. I become a doll--an object to be embellished.

These lines are a good example of the tone set in this book. There's glitz and glamour and magical cosmetics, but something is amiss in the world of Orléans, and I can't wait to find out what it is!

Also, there are teacup animals.

Some people are participating in Poetry-A-Day. Others are diving into A-to-Z. Have fun! My sanity has once again prevailed, and I'm doing neither.

But today is the first Wednesday of the month, and that means it's time for the Insecure Writer's Support Group. Please visit the site and the site of our founder, Alex J. Cavanaugh to join us, visit this month's co-hosts, and to meet some new faces.

This month's question is as follows: When your writing life is a bit cloudy or filled with rain, what do you do to dig down and keep on writing?

Hm...this implies that you have to try to keep on writing during those days. I don't buy into the "if you don't write every day you're not a writer" ideology, so if you're in a rut, it's okay. I take that time to dive into reading, do another hobby that isn't reading or writing, so just *gasp* vegging out. Let your head clear. If you have a dire, burning need to write in that time, then by all means do it, but don't feel like you absolutely have to if you just...can't. *shrug*