It's the 5th Wednesday of the month, which I have set aside for goals I want to achieve in the upcoming months.

As you can see above, I've launched a Kickstarter to commission an artist to create the cover art for my YA Fantasy Fractured Princess. Self-publishing was an idea I've had and been encouraged to do for years, but I at least wanted to try to get into the traditional publishing world. Query rejections were as far as I've gotten, so as I've said before, I'm taking control back into my hands.

There is more information below if you'd like to contribute to the art. The campaign will be live for 45 days, so you have time to consider if you can't contribute right away.

Thank you in advance!

It took me 30 minutes just to find a photo that suited my needs, and I even edited that!

Anyway, it is the fourth Wednesday of the month, so that means I am looking on back on the month to discuss any writing I have done. I haven't really done too much writing, but I have been writing, and that's always a good thing.

I did some last minute touches on Fractured Princess, which I plan to publish this year through Amazon. The Kickstarter for its cover art goes live next Wednesday, and I am trying not to freak out that I'm actually going through with this. I started writing this story in 2004. After a couple of computer crashes, breaks for college, three or four major rewrites and too many revisions and "no thank yous" from agents to count, it's a big step for me to say this story is ready to see real light. I hope people like it.

I've also done some more writing in The Queen's Daughters (introduced here), which will be the next publication if Divided Princess isn't finished first. TQD is the first non-derivative story I've written in a LONG time. Most people start writing because of a book they read, and as I've said before, my first attempts at books were because of television, a la X-Men: The Animated Series, which I was watching as a kid. Then came my rip-off of The Outsiders, and I was heavy into Backstreet Boys fanfiction in my teen years, The Tribe fanfiction in my college years, and between them Fractured Princess (formerly Save the Queen, formerly The Crystal Bearer), which (who doesn't know by now) is based on Final Fantasy (pant, wheeze). The Queen's Daughters will to be my first original-original novel-length story. The only thing I've pulled from for it is African mythology and folklore, and loosely at that. I'm really excited about it. I know how it ends, so I just have to get there.

Speaking of sequels (huh, what?), the other night on my way home, I realized that I might have an idea for a sequel to the The Queen's Daughters, and I'm here for it. I'll start writing down the ideas, but as I'm not even halfway done the first book, I won't focus on it too hard.

Wednesday Words: A Crown of Wishes by Roshani Chokshi

I forgot my book at home last week, so this week, I am sharing with you what I am reading this month. 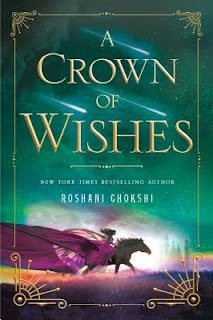 A Crown of Wishes is the 2nd installment to Roshani Chokshi's The Star-Touched Queen series. It follows an adopted prince named Vikram on a journey to a fantastical tournament with the reluctant Princess Gauri, who we saw grow up into a fearsome warrior in STQ. Here is the premise:

Gauri, the princess of Bharata, has been taken as a prisoner of war by her kingdom's enemies. Faced with a future of exile and scorn, Gauri has nothing left to lose. Hope unexpectedly comes in the form of Vikram, the cunning prince of a neighboring land and her sworn enemy kingdom. Unsatisfied with becoming a mere puppet king, Vikram offers Gauri a chance to win back her kingdom in exchange for her battle prowess. Together, they'll have to set aside their differences and team up to win the Tournament of Wishes - a competition held in a mythical city where the Lord of Wealth promises a wish to the victor.

Reaching the tournament is just the beginning. Once they arrive, danger takes on new shapes: poisonous courtesans and mischievous story birds, a feast of fears and twisted fairy revels.

Every which way they turn new trials will test their wit and strength. But what Gauri and Vikram will soon discover is that there's nothing more dangerous than what they most desire.

I'm not as into this story as I was with the first book (it's how I felt about Bitterblue; I didn't really need to see what was going on with her down the road), but the dialogue and banter between Vikram and Gauri is hilarious. I love Vikram's character. Also, once again, we get to delve into Indian fantasy and mythology. I like getting to see the Night Bazaar again (I wonder if anyone has illustrated it...). I'd like to know if we see Maya again.

So let's find out, maybe. Using Random.org, I will select a line from a page to share. There are 367 pages in the book, and Random has chosen page 339. Geez. Ah, wait, the opening line to a chapter, and it's a good one.

Skanda turned to me. "Why aren't you dead?"

I can't wait to see how she gets back home. I accidentally saw a line from the page before it that really intrigues me, too, so now I must speed up my reading!

Today is technically supposed to be a Wednesday Words day, but I forgot my book, so I thought I could at least take this time to say that I will be posting weekly again:
Starting in February, the 2nd Wednesday of the month will be to share with you what book I'm currently reading, but for this month, that will be next week.
Consider this week my writing update, which will be the 3rd Wednesday starting in February.

The 4th Wednesday will usually be the last Wednesday of the month, so I will provide what is hopefully a positive review of my progress.

The 5th Wednesdays fall at the beginning of the quarter this year, so I will be establishing some goals for myself for the three months that follow it. January's in particular will be my goal of reaching my Kickstarter goal for my book cover (squee).

I guess I shouldn't be surprised whenever another year occurs, but I can be thankful that I survived another year. 2018 was a difficult one, and I'm glad I can start 2019 with some high hopes. I hope everyone enjoyed their New Year's celebrations and the holiday season!

It is once again the first Insecure Writer's Support Group of the year! Please visit Alex J. Cavanaugh and the IWSG site to join in with the rest of us anxious writers.

I plan on beginning my self-publishing process this month, and I'm pretty nervous. I hope everything works out and that people actually buy my book. I certainly hope more people like it than don't. I want to look over it one last time, but I know if I do I will end up touching it, and I don't want to over-write it. I've probably done enough of that. There's an artist I want to hire for the cover, so I'm building a Kickstarter for that, and we'll see what happens from there.

Also, my older sister is starting a career coaching company, and she's asked me to be her associate for writing consultation, so this will be a very interesting year! I have to send her pricing and a profile this week, so I'll probably do that at work. hehe

The question for this month is: What are your favorite and least favorite questions people ask you about your writing?

I wish I had a favorite question.

One of my least favorite questions about my writing is probably, "Do you have anything out there? Why not?" Because who has the time to explain to publishing process? BUT, I can say "Soon" now, so maybe I won't hate it anymore.
on January 02, 2019 15 comments: