September is around the corner, and I have accomplished very little. I don't think I even read the entire month of August, except for web comics and a book for my Praise & Worship Team at church. This weekend, I did start writing again, so that is a positive. I'm working on a new beginning scene for my new adult fantasy. I also took a peek at the last scene I wrote for Fractured Princess's sequel, so I need to get back into that as well. I know where the story is going, but I need to know why. That's something I may need to flesh out.
I've gotten a lot of TV watching in for sure. I binge watched both seasons of The Umbrella Academy at  the beginning of the month. A great series, and I'm always jealous to see someone successfully execute the "mutant school" trope. That was what I first started writing when I was little. Maybe I'll be able to get it right, too, one day. I'm now on the last season of Avatar: Legend of Korra. I saw the first season and the first few episodes of the second when it first came out, but according to fans, Nickelodeon moved the show's time slot often, so no one could really watch it like they wanted; and so I've watched the rest of Season 2 and Seasons 3 and 4 for the very first time. It's amazing to see how the world has evolved, especially without Aang in it.
What I've done the most this month is play video games, mainly Apex Legends, but I'm also replaying the FFVII Remake, and I started a few new games: Call of Duty: Modern Warfare and Fall Guys. They've been pretty therapeutic when they're not stressing me out. I've been part of the Black Girl Gamers group for a couple of months now, and it's been nice having a safe space to just enjoy myself and talk with others like me. Some of us are even going through the same things, like recently losing a parent, and that's very comforting.
I just realized I missed my quarterly goals post for July, but that's okay. My goal this quarter is to get back in the swing of things. I'd also like to try to pursue a job I really want to do. Being home since March, you realize what you're looking forward to when the world opens back up, and being at a job that I'm doing just to have a job is not one of those things. I joined a startup production's Discord this week, and I don't know how far that will take me, but we will see. I've also been asked to be on a panel for the Asexuality Visibility & Education Network in September, so I'm very excited and nervous to discuss ace visibility in fiction. I need to go ahead and move some of the ace books I have on my To-Read list up to #1.
Lastly, I started a new Instagram for my writing, gaming, and tv habits, so if you would like to follow me, please do! My handle is DebReneeByrd.
I hope everyone else has had a good August. I will see you next week for the monthly IWSG Post!
on August 26, 2020 1 comment: 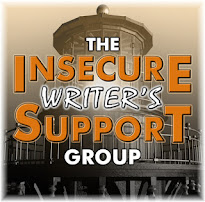 Well, here is how August is going so far: I was on preliminary quarantine because I came in contact with someone whose whole family decided to get together for a party and with no safety precautions, thus contracting COVID-19. Fortunately, my sister and I tested negative. Then yesterday, Delaware was hit with tornadoes during Hurricane Isaias. Happy 2020!
The first Wednesday of the month is set aside for the monthly Insecure Writer's Support Group post. If you're a writer, you can join us by visiting the website. Also, stop by the founder's website: Alex J. Cavanaugh, and the hosts for the month to thank them for their hard work!
The question for the month comes with a quote: "Although I have written a short story collection, the form found me and not the other way around. Don't write short stories, novels or poems. Just write your truth and your stories will mold into the shapes they need to be."
Have you ever written a piece that became a form, or even a genre, you hadn't planned on writing in? Or do you choose a form/genre in advance?
I usually know the genre. Sometimes I write scenes that I think belong in one story, but as the story unfolds, the scene no longer works, so I save it until I find its proper place.
I used to try to write short stories, but I feel like they would be too long or rushed. I'm also terrible at standard poetry. I think I'm better at haiku and novels. But if a story comes to me that finishes before I expect it to, I won't stop it.
How about you?
on August 05, 2020 6 comments: