First off, Happy Juneteenth! If you don't know what that is, please research it. TLDR: June 19, 1865 was the day the announcement of the abolition of slavery in the U.S. reached Texas. It really should be a national holiday, but . . . this is America.

Anyway, onto my writing update! Here's Snoopy, making writing cool since the 50s. 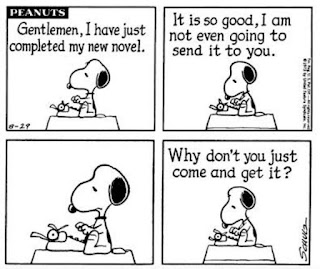 I was about to say I haven't done any writing, but actually, that's not true. I've written a very pivotal scene in Divided Princess, sequel to Fractured Princess. Stepping into the waters with this story, there are some dynamics I still have to figure out, but I imagine that just like Cyan and Jonnie created their own dynamic during, like, draft SIX, I think things will work themselves out eventually.

I skimmed The Queen's Daughters yesterday so I can work on more scenes for it. I'm a little stuck, even though I know what the next scene is. It's not even a hard scene, as far as I know, so I should just type away at it, even if it's fragments of the scene, so I can move on. This story is really going to be emotionally tough and will have at least two trigger warnings, but the inciting incident also stems from an emotional purge for me, so I knew it wouldn't be sunshine and rainbows. I've never been able to write sunshine and rainbows. I'll try one day, I promise.

Book news: I've pushed publication to July, but I should have the cover in the next two weeks. I can't wait to share it with everyone! I wanted to update the look of my blog; technically, it's been the same since the old blog, so once I have the cover, I will be able to change the theme up and get rid of the watercolor background. I love it, but I want this blog to look a little more professional once I'm published. I can't wait to test that out, too!

Wednesday Words update: Two more books I forgot I had on hold came in for pickup at the library, so I've added them to my post from last week. I'm being REALLY ambitious this Summer!

Next week is my monthly update, so I hope you all have been enjoying June so far, and I will see you later!
on June 19, 2019

How exciting that you'll have the cover so soon! Looking forward to its reveal. :)

And best of luck with your writing! Absolutely nothing wrong with a lack of sunshine and rainbows. Darker stories can be very therapeutic!

Good luck with the book cover.