Well, I'm off to a good start. I'll pretend like I posted this Wednesday. 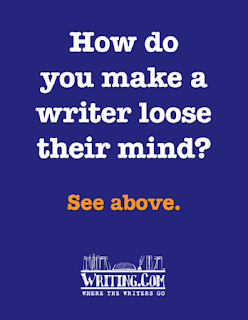 It's already the 4th Wednesday of January, and I can't believe it. We're currently behind a week, because I forgot that IWSG was on the 2nd Wednesday this month, but that's okay. We're going to pretend it's the 3rd Wednesday. On 3rd Wednesdays, I usually forget to post on time, and then I give a writing update, so here we go.
I've actually been writing a little bit! I had a few bursts of inspiration for the asexual romance I've thought about doing for a couple years now. I now have names for my main characters, a couple major plot points, and some scenes planned! I want to kick it into full gear on this one soon. I haven't written romance in so long, but I know it will feel natural when I get back into it.
A couple months back, I also put down some words on a new supernatural fiction that I'm extra excited about featuring nephilim. I've wanted to write about these creatures for a minute, and I feel no one has gotten them right so far--though that's not totally fair to say, because there isn't much information on them in the first place. Still, I'm excited to give it a go.
Divided Princess needs more work before I can go on. I feel like the chapters I've written are okay, but not much happened, so I am going backwards for a little bit to insert some action before I move forward. I did put down a couple scenes, though, one of which is the last scene, and I'm extremely excited about it. It's something that didn't make the many cuts of Fractured Princess, but it will definitely work now.
My NA fantasy is on hold at the moment, just because of all the work I've done on the above. I had been reworking it, though, and I like where I'm going with those changes, too.
If you want to see what all of my future projects are, you can also view my "Coming Soon" story at my Instagram account. It has music, because I'm dramatic.
Have a great week! See you (on time) next week!
on January 22, 2020

Wow! Love the sound of all your projects, but am especially intrigued by the asexual romance. I'm always on the hunt for stories like that!