Final Fantasy Friday: Give It Our All

*This post occurred before I changed the WIP title.* 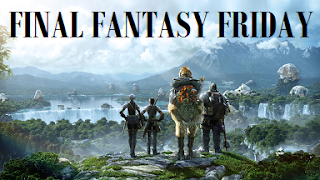 As my Cover Girls are on break for NaNo (at least I think they are), the next few weeks will be dedicated to sharing with my readers the inspiration behind my current WIP, The Crystal Bearer.

Something I was asked a couple of times: "If it's Final Fantasy, how come there are so many?" To be honest, I didn't know the answer for a long time, but the creator, Hironobu Sakaguchi, explained it perfectly:

After switching over to the Famicom, there was a time when I wasn't happy with anything I was creating. I thought of retiring from the game industry and I created Final Fantasy as my final project. That's why the title includes the word 'final' but for me, the title 'Final Fantasy' reflects my emotional state at the time and the feeling that time had stopped. They say that technologically, it's good to keep going, and each time, we give it our all and expend our skills and energy until we can go no further; this is what I consider to be the 'final fantasy'. ("Final Fantasy Celebrates its 25th Birthday, Gadgets Magazine, December 2012)

And what a great piece of encouragement, too! Keep going and give it your all!

And now, a fight class from the original Final Fantasy:

Warrior (Fighter) — A specialist in heavy weapons and armor who can withstand tremendous amounts of punishment (hm...Sounds like a writer). Can become the Knight later in the game, who is able to use the most powerful weapons and some White Magic spells.

Have you heard of Final Fantasy? How do you feel about what Hironobu said?
on November 06, 2015

How cool that just when he thought he was done, he was just beginning a new phase -- and became an inspiration to other creatives!

I like that when he thought he was at the end of his journey, he was really at the start of a new one.

And what a great one it was!