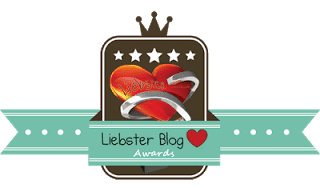 I was nominated for a Liebster Award by Cover Girl Dani Bertrand at Entertaining Interests! Thank you, Dani! I shall accept!

It's been two years since my last nom, and I have no recollection of the rules, except for EIGHT MILLION QUESTIONS! Here are the rules. lol

If you have been nominated for The Liebster Award and you chose to accept it, write a blog post about the Liebster Award in which you:
List these rules in your post (copy and paste from here). Once you have written and published it, you then have to:

All right, here I go!

What God or Deity from Mythology (Greek, Norse, etc) do you think represents you the best? I don't know if she represents me best, but I've always had a love for Artemis.


Which book character would you want to be? Winry from Fullmetal Alchemist! She gets Ed in the end. <3

If you were to survive on your own in the wilderness, what ONE tool/weapon would you pick? A spear. I need a weapon that I won't be prone to accidentally cut myself with.

What would your Superhero name be? The Red Avenger

What was your first concert? Technically, it was a Yahoo-Telecasted Backstreet Boys concert, but I think Fourth of July on the Parkway was my first one where I was physically there.

How would you describe yourself in one word? Crazy

Name something from history which you would love to discover, explore or recover. I would love to see the Mayan and Aztec structures before they were just ruins.

If you were to be reincarnated as an animal, which would you choose? My first reaction was a turtle, so...turtle. lol

Is there a movie you would like to give an alternate ending to? What ending do you have in mind and why? There were many books I read in high school that were jacked up by Hollywood, so I would just like The Good Earth, Fahrenheit 451, and A Clockwork Orange to follow the endings they had in the books.

Name one thing you'd like to improve on. Focus.

Did you have a non-writing ambition as a child (Like wanting to be a firefighter)?

What one thing would you take with you on the emergency space craft if the earth were to blow up right now?

Name a time where you felt like you were on Cloud 9.

What is your most treasured keepsake?

Who is your favorite book character and why?

Who is your favorite movie character and why?

What has been your favorite book to movie adaptation? If you don't like any, who did the worst job?

Research might be needed: What is your state flower?

Thanks for the award!

I'm with you on having a spear in the wilderness, and also on coming back as a turtle/tortoise. :)

AGH I'm super late to the party! I blame a crazy work weekend. Thanks for the award (I guess we've come full circle, LOL)!